Singapore property market in the third quarter of 2016

Prices of private homes in Singapore fell 1.5 per cent quarter-on-quarter, higher than the 0.4 per cent decline in Q2 2016 – indicating continued pressure on private residential prices. With the property market continuing to operate in a tight financing and regulatory environment, Singapore’s private property market remains firmly within the down-cycle. This is the 12th consecutive quarter of decline which shows the sustained effectiveness of the numerous rounds of cooling measures.

“The greater fall in Q3 suggests that private residential prices are still under some considerable pressure due possibly to the continued enforcement of the cooling measures. I fully expect prices to continue its price correction for the next 2 quarters at least – decreasing by up to 3 per cent in 2016 – this is the lowest since 2014.” 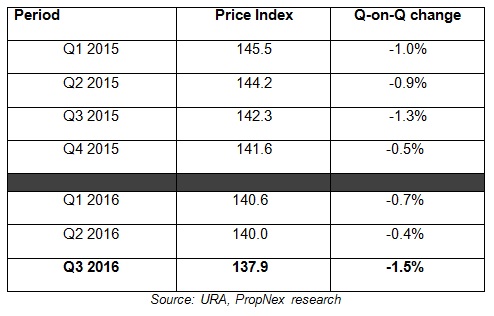 Broad based decline for all segments (CCR, RCR, OCR)

After 2 consecutive quarters of price increases, luxury properties in the CCR fell 1.9 per cent after rising 0.3 per cent each, in the past 2 quarters. This is the largest fall in the CCR since 1Q2014. In the RCR, prices fell marginally by only 1.0 per cent in Q3 while mass market property prices also fell 1.0 per cent in the quarter.
“Most purchasers in the OCR and RCR are home-stayers and a significant group of them fall into the HDB-upgrader category.

However, recent price indices from HDB and URA have fallen in the last couple of years, which again have impacted their upgrading ambitions. The non-increment in prices of HDB resale properties have led to a smaller gain achieved from the sale – which will in turn, limit the budget for their new private property and may cause some to put their plans on hold because the potential profit is insufficient to allow them to upgrade”.

“Interestingly, we also see the robust activities in CCR for the uncompleted units, with the transactional volume to date surpassing that of 2015. This is due to some of these developers giving attractive prices and deferment payment scheme to interest buyers in these projects,” commented Mr Ismail Gafoor, CEO of PropNex Realty.

“In addition, the resale market is also reviving, forming 53.9% of the total number of transactions in 3Q16, highest since 2013. These secondary market sellers face stiff competition from developers who are continuing to launch projects at attractive prices and incentives. As a result, re-sellers may have to lower prices in order to make a sale.”

Meanwhile, HDB resale prices remained unchanged in Q3 2016 – the index has shown negligible price movements up and down in the past 4 quarters, therefore it is obvious that prices in a consolidation phase, with a possibility of bottoming out soon.

Mr Ismail Gafoor, PropNex Realty CEO said, “with prices consolidating, transactions will pick up. Buyers who have remained on the side-lines should have, by now, understood that prices will not fall very much more below this level. We believe that this is the new ‘norm’ – whereby prices will not fluctuate much as compared to the years of 2007 to 2011.”

In 2016, HDB resale prices is on track to end the year on a positive note due to the non-movement of prices for the last 2 quarters – the index will also see the lowest price fall in the last 3 years as compared to 2015 when overall resale prices fell 1.7 per cent, and 6.2 per cent in 2014. The current price points will entice more buyers to enter the market as it is attractive enough for young couples and upgraders.” 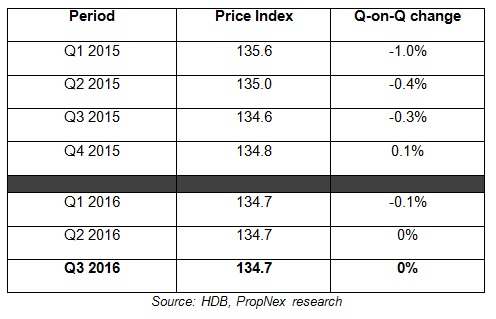 With lower prices, resale transactions in 2016 are expected to surpass 2015 – signaling a return in confidence of the current resale market.

Resale prices to be flat in 2016, or rise slightly

In 2016, the government will maintain measures to stabilise the public housing market such as the Mortgage Servicing Ratio (MSR) cap of 30 per cent and the maximum loan term of 25 years for HDB mortgage loans, three-year wait for new PRs, and allowing singles to buy two-room BTO flats in non-mature estates.

In addition, BTO supply will also increase to 18,000 new BTO flats, compared to the 15,000 which were launched last year. These will act as a counter balance to potential price increases.

Mr. Ismail predicts that 2016 may spring a surprise as the current price points will entice more buyers to enter the market as it is attractive enough for young couples and/or upgraders – we will probably see a price movement of up to 1 per cent, with volume exceeding 20,000 units due to the lower asking prices.

There seems to be little respite for the private residential property market at least in the short term. This is due to the continued enforcement of the property measures and a large oncoming supply of homes. As such, Mr. Ismail predicts that a buyer’s market is expected to persist until the end of the year.

“We expect prices to remain relatively stable with a bit of downward pressure in 2016. Developers will continue to adjust launch prices to match the current inertia in the market, but will not drop prices too much due to the high price in which they have secured the land. Similarly, resale prices will take cue from the primary market in a bid to attract buyers”, said Mr. Ismail.

“However, Singapore’s property will be the asset choices of the most due to the economic and political stability and strong currency. As long as the macroeconomic environment remains stable, the residential market will remain resilient in the months to come.”