URA’s Q4 2016 data shows that prices of private homes in Singapore fell 0.5 per cent quarter-on-quarter (Q-o-Q), with an overall 2016 price fall of 3.1 per cent, marginally a 0.6 per cent overall decline from 2015. However, this is the lowest fall since 2014. The overall price decline in 2016 reflects the current languid market sentiment and the sustained impact of the cooling measures. 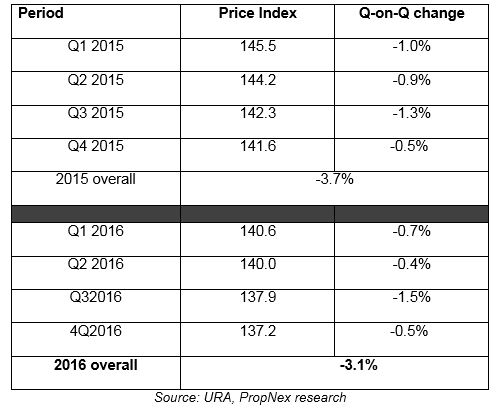 “The volume of activities in CCR had more than doubled (125% increase) in 2016 (compared Y-o-Y) as the price index recorded the lowest overall drop of 1.2 per cent, compared to the other regions in the whole year. Due to the cumulative price drop of 10% In CCR for the last 4 years, buyers took the opportunity to enter the market as many sellers and developers are giving close to 20% discount from the launch or peak prices, which attracted many local and foreign investors to pick up the units in the region.” With renewed confidence and increase number of buyers, we can expect CCR region to do well in 2017, with positive 1 to 2% growth.

The overall price fall in OCR for 2016 at -3.4% is a result of subdued demand from HDB upgraders due to the lower cash proceeds from their sale of their public housing. With existing unsold flats and expected new launches in OCR, developers have to continue with sensitive pricing. The negative growth trend is expected to continue in 2017 for OCR, with a price correction of -3 to -4% this year,” said Mr Ismail.

2016 saw a record total number of 16,378 transactions since 2014. The rebound of 28% in the resale market comparing Y-o-Y is because of attractive resale property prices which are relatively 10-15% lower than new project prices. This naturally attracted the mass market home buyers who are constrained by TDSR. Outlook for private properties in 2017

“The current price points attracted home investors’ interest in 2016 and we predict that the volume of transaction in the private residential segment for 2017 at 17,500, a 6.8% increase from 2016. Despite the uncertain economic outlook and impending interest rates hikes, we are expecting a price moderation in 2017 with possible negative growth of not more than 3 per cent”, remarked Mr Ismail. Mr Ismail added that 2016 witnessed 4,311 transactions, a 50% increase Y-o-Y in the Executive Condominium (EC) segment. It is predicted that there will be a total of 3,000 ECs to be transacted in 2017 due to the lower number of EC project launches.

HDB resale prices dipped 0.1 per cent in Q4 2016 with an overall price drop at 0.2 per cent in 2016. Mr Ismail commented “As predicted earlier last year, the total number of HDB resale transactions in 2016 exceeded the 20,000 mark and this is an increase of 1,507 units compared Y-o-Y. A closer look at the numbers (at the table below) revealed that the increase in number of transactions is largely attributed by the double-digit growth of transaction in the bigger flats. 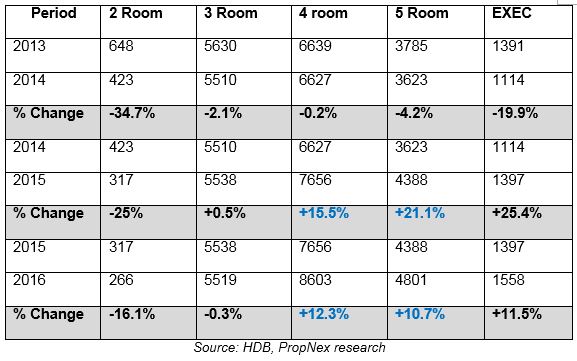 Many PRs, HDB upgraders and newly married couples are finding resale properties attractive due to price points and zero COV in more than 80% of resale transactions island wide.

Resale prices expected to be flat in 2017

Mr Ismail Gafoor, said “The potent combination of the measures has been effective at slowing down the price growth of HDB resale prices. Having experienced double digit price growth in HDB resale flats in 2010 and 2011, HDB resale market had its biggest correction in 2014 at -6% and tapered to smaller corrections of -1.6% in 2015 and -0.2% in 2016. HDB prices are going through a period of consolidation with marginal price movements.”

We predict that 2017 HDB resale volume to be 21,000 as the current price points will entice more buyers to enter the market as it is attractive enough for young couples and upgraders – which could also be partly attributed to the non-existence of COV across the board,” said Mr Ismail. “HDB resale prices are expected to continue being flat in the first half of 2017 and take a positive turn in the second half of the year ending with a positive +1 to 2% price growth,” predicted by Mr Ismail.