Is Singapore luxury condo market promising in 2018 and beyond?

Singapore luxury condo market is one of idea destination choices for non-citizen high net worth investors who play an important role together with local riches. Based on Knight Frank Research’s analysis of the Prime Global Cities Index of key cities around the world, ultra-luxury non-landed homes in Singapore have shown a continuous annual price growth over six quarters since Q1 2016, rising 3.5 per cent y-o-y in Q2 2017. In this page, we will go through the newspaper artcile published in The Business Times, October 3, 2017. The author is Alice Tan, Director and Head, Consultancy & Research, Knight Frank Singapore. 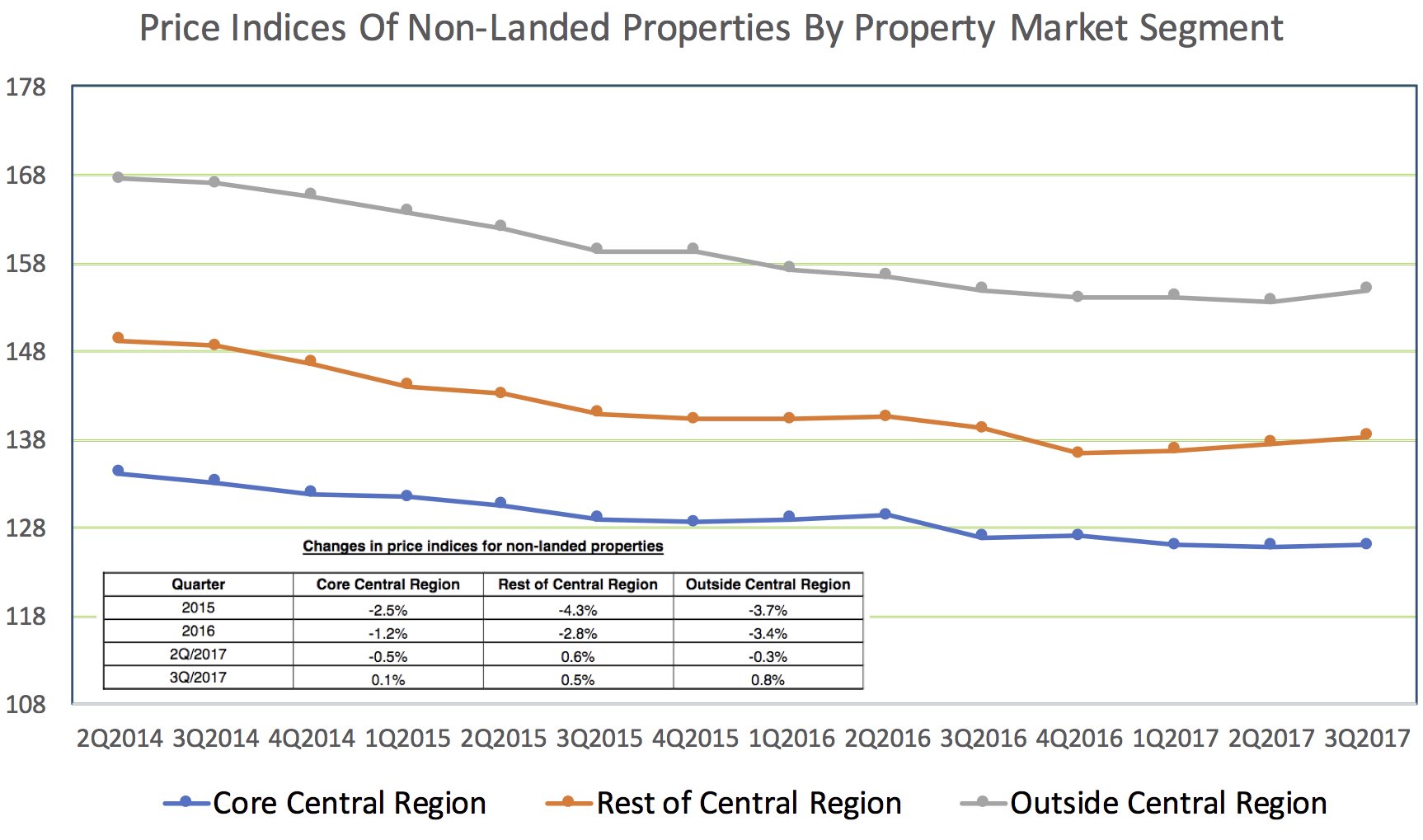 Amidst the property price recovery, Singapore’s luxury condos still show an attractive entry value compared to prime homes in other key gateway cities such as Hong Kong and London. According to Knight Frank Research’s analysis of a basket of ultra-luxury non-landed homes in Singapore’s prime districts, the average price is to be about S$3,100 per sq ft (psf) in Q2 2017 (see Figure 1). In US dollar terms, this is about 31.1 per cent lower than London’s average price of US$3,236 psf, and 26.8 per cent lower than Hong Kong’s average of US$3,047 psf (see Figure 2).

The attractiveness of Singapore high end condo is partially thank to a series of property cooling measures since 2010. The well-known Total Debt Servicing Ratio (TDSR) framework, Additional Buyers’ Stamp Duty (ABSD), and Seller’s Stamp Duty(SSD) are some significant brakes to pull back the prime residential property prices for the last few years.

Housing affordability in Singapore has improved significantly given most cities globally, however, has deteriorated. As reported by Demographia.com and JLL Research and shown in Figure 5, for Singapore, affordability has improved and estimates that it takes 4.8 years of income to buy a home in Singapore in 2016. In many cities, home prices rose faster than income growth.

In 2017, the tweak of SSD from 4 years to 3 years with lower gradual tax ratio and TDSR policy have evoked the recovery of market. We see this policy move as the government signaling to the public they are firmly on a loosening path.

When Singapore is compared to its key rival city, Hong Kong, Singapore investors should feel happier now. To regulate Hong Kong’s property market, a series of cooling measures have been implemented since 2010 too.  The most recent measure is that: to impose on foreign home buyers and companies amounting to a total of 30 per cent in stamp duties payable for any residential property purchase from April 12, 2017.

While interest in Hong Kong properties remained buoyant despite these measures amid limited supply, property investors, in particular Chinese mainlanders, have been exploring markets outside Hong Kong and mainland China for diversification, children’s education and long-term wealth preservation objectives.

Golablly, Singapore is still thought as a safe haven for its stable economic and political fundamentals and are attractive for both individual and corporate property investors. The transparency and comprehensiveness of upcoming development plans, sustainable property measures by the government, plus the commitment to deliver these plans, are strong qualities that Singapore still implant confidence in real estate developments and prospects.

Recently years, with decentralization stragety, there are strong expansion of private residential developemnts and transport network to outside of prime districts, home buyers are offered with more choices beyond the Central Region in Singapore. Notwithstanding,  the charm of traditional prime districts 9, 10 and 11 are not effected so much given their central location, greater conveniences amid a rich array of amenities and prestigious addresses.

From the point of view of invstors, the implementation of the TDSR, ABSD and SSD rulings has created the opportunity of entry lower prices in prime districts.  Referring to the Figure 3, the transaction volumes of non-landed homes in districts 9, 10 and 11 reached 2,247 units in the first eight months in 2017, translating to 281 units per month. This is 40 per cent higher than in 2016, which registered an average of 201 units per month.

Prospects for prime districts in CCR

Some investors will argue that it’s too early to conclude if Singapore’s luxury residential market is toward to a full price recovery at this moment. Here we can check if there are upside factors to watch in the high-end segment over the medium to long term horizon. 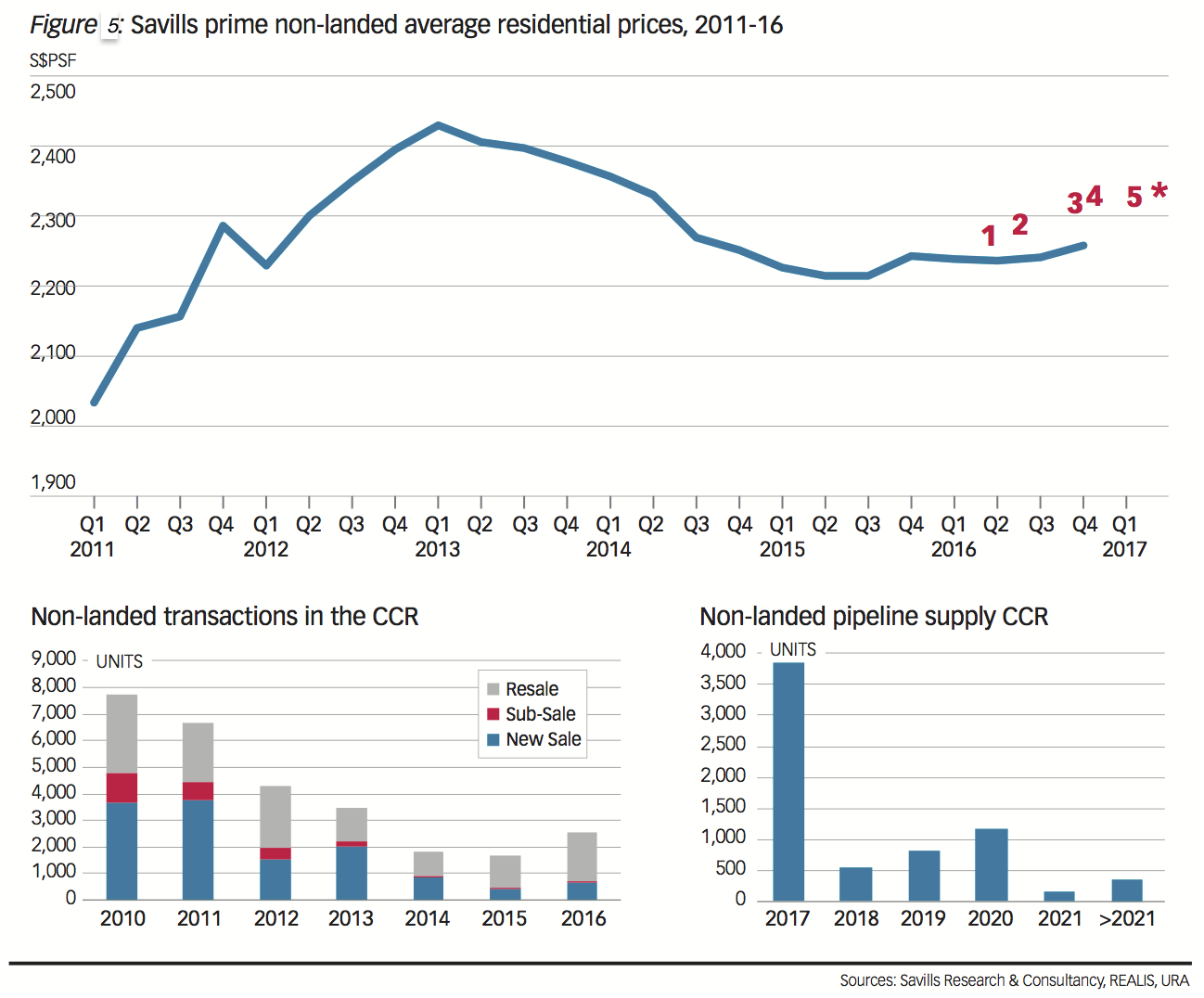 Firstly, some important indication from prime non-landed average residential prices chart by Savills:  Alan Cheong from Savills Singapore has worked out a series of very informative chart in the Figure 5.

In the price chart , Alan highlighted the five major kickers that catalysed the phigh-end condo market in the past one year. The first was the relaunch of OUE Twin Peaks with the deferred payment scheme. The second was the date of the bulk purchase of Starlight Suites; third was the sale of iLiv@Grange to a group of high net worth individuals; fourth was the PPS transaction for Nouvel 18 and fifth was the sale of the 45 units at The Nassim. When these transactions were sequentially laid out on the price chart, the author has witten that prices have stabilised and inched up marginally.

The asterisk in the price chart would be the aligned with bulk sales at TwentyOne Angullia Park to Tower Capital, the sale of The Lumos to a group of Singaporeans and the purchase of Robin Residences by personalities linked to Evia Real Estate. The sale of Cityvista Residences by Alpha Investment Partners to an Indonesian was probably also inked between point 5 and the asterisk.

Secondly, increase of developer sales in prime district in 2016, there was a 54.5 per cent year-on-year (y-o-y) increase as compared with that in 2015. Kindly please note, in prime districts, many of resale transactions from completed projects are also concluded by developers with creative payment scheme and attractive discount. Those group of savvy rich investors have sensed the improvement of fundamentals.

Thirdly, the limited new supply of high-end non-landed prime homes. According to Alan’s research, the prime districts would see a steep fall in the new supply of completed homes after 2018, with the next wave of supply likely to come on only after 2021. This includes future completions of high-end projects stemming from a fresh injection of land supply from Government Land Sale (GLS) sites, and private collective sales in 2016 and 2017.

Fourthly, the attribute of freehold tenure of residential properties, which are mainly in the prime districts, would be enhanced as the upcoming pipeline of non-landed residential homes would be leasehold from GLS sites. Beyond that, the prestige of a home address in the CCR is imagined to manifest with upcoming development plans. Those ambitious plans include, to create the Greater Southern Waterfront City after the existing port shift to The Mega Port in Tuas and constant rejuvenation plans for the Central Area to create a dynamic city centre. Please refer to Singapore Growth Area here.

Singapore government is transforming the core centre region to flourish its commercial, civic and cultural amenities.  There is continuing interest from the private sector to own and invest in real estate in the CCR with middle to long term prospective. The attractiveness of high end condo in the CCR remains or even elevate along with the development of island’s real estate landscape.