Where are the Singapore growth areas in Government planning? For years, Singapore has built a systematic planning strategy on how to make the good use of its scarce land.  The innovative hierarchy planning process flows down from strategic land use and transportation plan called Concept Plan, to detailed plan called Master Plan, and to Government Land Sale with development control.

Singapore’s growth areas are conceptualized and cultivated progressively under the Government’s strategic planning and detail implementation. Here are some spotlight areas which are either completed, under development or planning. 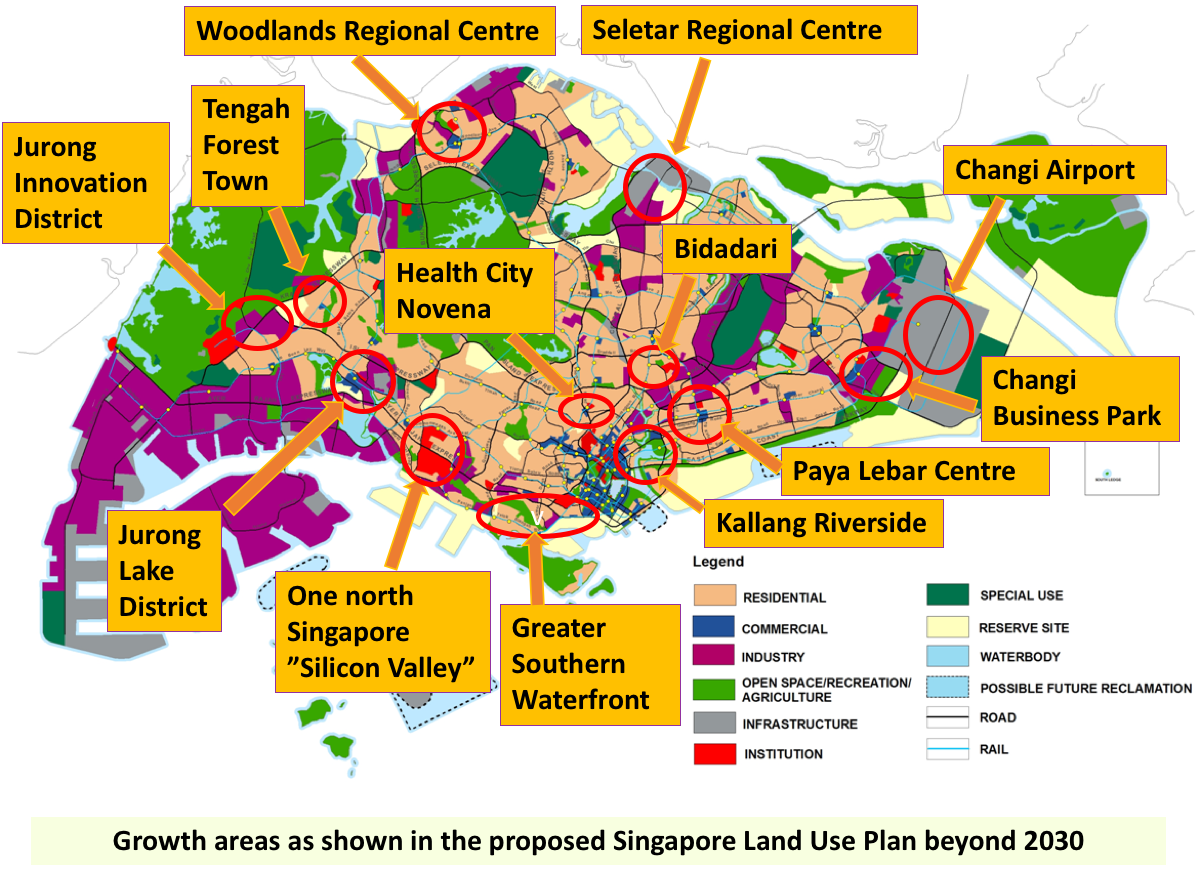 Singapore’s City Centre (SCC) is perhaps the most dynamic and vibrant area that drives Singapore to a world first-class city to work. As the Singapore’s commercial and financial centre, SCC covers from Raffles Place, Shenton Way, City Hall, Bugis, Marina Bay, Tanjong Pagar and part of area along Singapore River. During the past decade, SCC has transformed from an intense business and working place surrounding with skyscrapers to a wonderful and vibrant destination with amazing establishments for working, living and playing together.  Among them, Marina Bay, as the largest urban transformation project, is the new downtown district with new skyline developments such as Marina Bay Finance Centre, Marina Bay Sands, Singapore Flyer, and Gardens by the Bay.

Besides Marina Bay, the growth of SCC also expands to The Beach Road/Ophir-Rochor Corridor and Tanjong Pagar area. There will be additional opportunities for more large-scale commercial and mixed-use developments to further catalyse Singapore’s transformation into a vibrant global city. With unparalleled locations, these areas provide residents with a distinctive city lifestyle with easy access to the major shopping, dining and entertainment areas at Orchard Road, Singapore River, Bras Basah and Bugis.

Marina Bay locates at the estuary of Singapore River. It is a very unique waterfront district extending seamlessly from the existing Central Business District (CBD). With years of strategic and innovative planning and precise working, Marina Bay is undoubtedly a beautiful name card of Singapore with so many newly-built world’s premier-level facilities for business, entertainment, play, shopping and living. Click here to discover the wonderful Marina Bay.

Located at the southern gateway to the CBD, the Tanjong Pagar area is seeing a new giant mixed development called Tanjong Pagar Centre spanning 1.7 million square of floor space at Tanjong Pagar MRT station. Today there are more new office, hotel and residential developments under construction. For example, TP180, a 38-storey Grade A offices and 200 residential units mixed skyscraper is developing by GocoLand. A luxury business hotel will also be built next to the main tower housing the residences and office space.

Located at the northern gateway to the CBD, the Beach Road / Ophir-Rochor Corridor is planning new mixed-use developments that connect Litte India Historical Dsitrict, Kampong Glam, Bras Basah.Bugis and Beach Road Conversation area with set in a lush landscaped park-like environment with direct and easy access to the rest of the city.

Kallang Riverside is next to Greater Marina Bay District and comprises 64 hectares of prime developable land. With the advantage of over 2000 meter long water frontage, Kallang Riverside is the few locations in the vicinity of the heart of Orchard Road, the Central Business District and Marina Bay. With several MRT stations such as Lavender, Kallang and Stadium which provide convenient accessibility to the rest of the city, Kallang Riverside have witnessed a group of giant developments under its wing. The New Sports Hub to be completed in 2014 is just next to Kallang Basin and Stadium MRT Station, Kallang-Paya Lebar Expressway(KPE) and Nicoll Highway. As a primer place bursting with opportunities and a group of major developments are either under construction or in the pipeline. 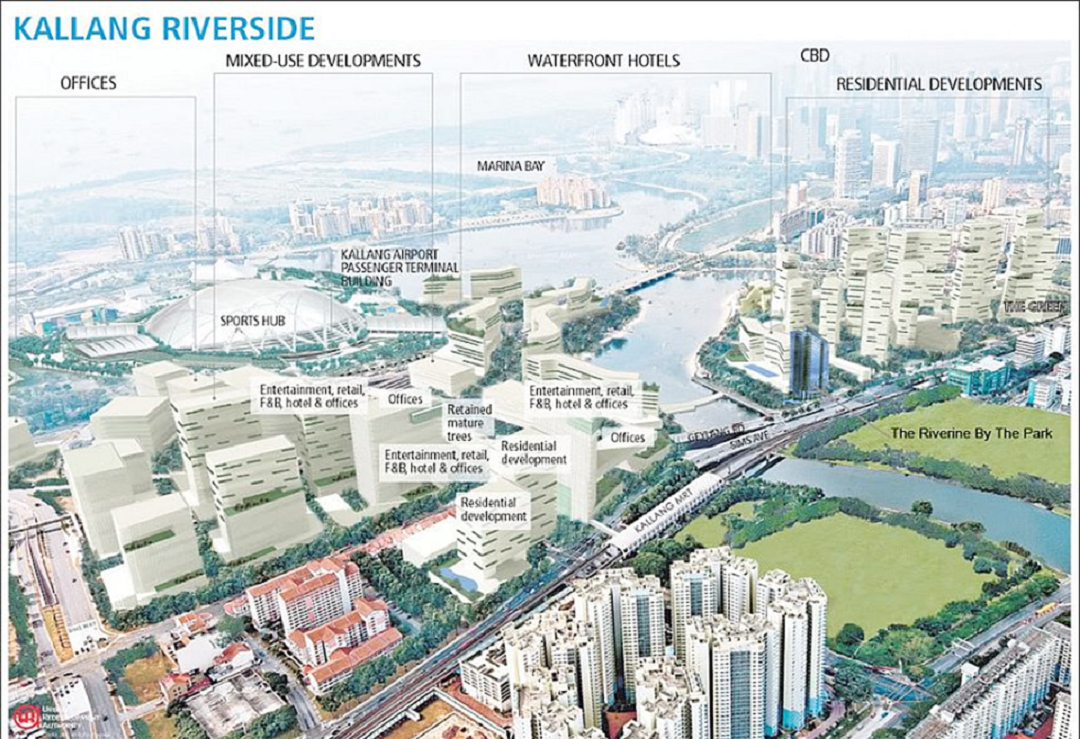 With the upcoming Sports Hub and a string of major developments around , Kallang Riverside will have easy access to exciting activities throughout the year.

Paya Lebar Central is envisioned to be a city fringe commercial hub for a mix of office, retail and hotel uses from Master Plan 2008.  Paya Lebar Central is growing around the Paya Lebar MRT Interchange serving the Circle and East-West MRT Lines. The area has easy access of 10-minute drive to the CBD is close to major expressways (PIE and ECP) and major roads such as Sims Avenue, Paya Lebar Road and Changi Road.  A mixed development of premium-grade office and retail units and archor spaces, Paya Lebar Square locating in the heart of Paya Lebar Central is estimated to be completed in 2014. 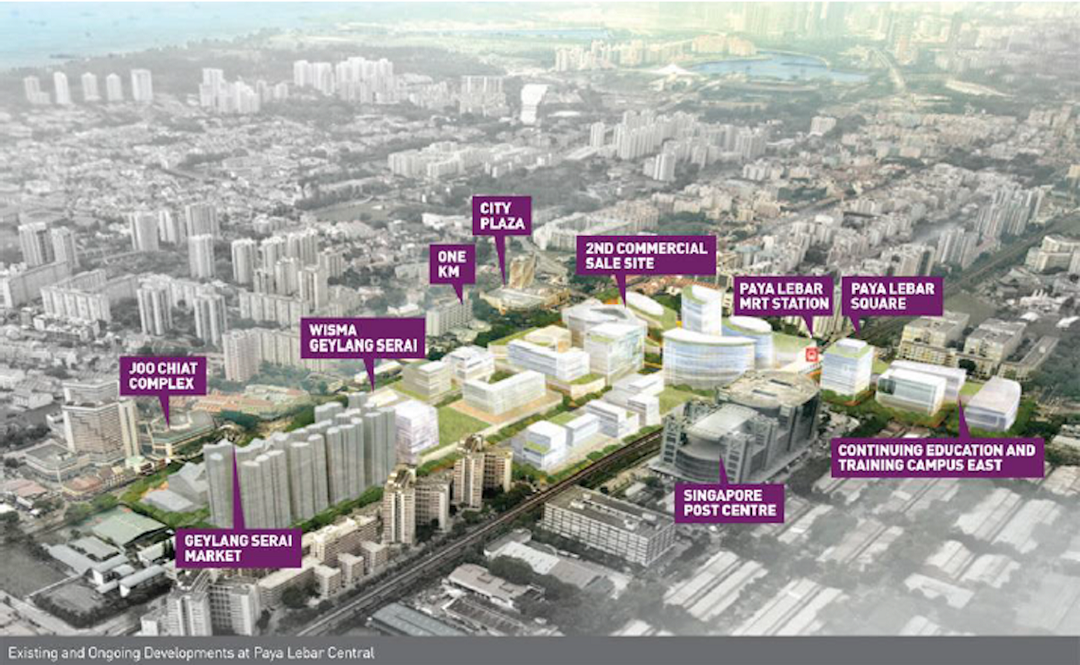 As Singapore’s knowledge city focused on innovation-intensive economy. One North has significantly shaped the future at Buona Vista MRT Station. One North aims to combine higher educational institutes, residences and recreational amenities with hi-tech research facilities and business park space, to create an ideal work-live-play-learn environment conducive for creative and innovative activities. One North is both close to Buona Vista MRT Station and some of the big public agencies such as National University Hospital and Ministry of Education. There are also many prestigious educational institutions such as National University of Singapore, University Town, Singapore University of Technology and Design, Singapore Polytechnic, Anglo-Chinese College and Schools, United World College of South East Asia Dover Campus in the vicinity.

With Buona Vista MRT Station interchange of East South MRT line and Circle MRT Line, the district has easy access to shopping mall at and other social and recreational facilities in Holland Village. Recently years, several so-called mix developments like The Star Vista, Buona Vista Xchange, The Rochester and One North have great boomed the demands for living, shopping, culture and art, entertainment, recreation at Buona Vista.

As the country’s largest healthcare complex, Health City Novena will enhance Novena as the healthcare hub ahead of Outram Park. Built on a land of 17-ha and overall built-in area above 250,000 square meters. Health City Novena had been officially launched in Aug 2013 and expected to be completed by 2030 after the conceptualization in 2010.  Health City Novena will link to TTSH,  Ren Ci Community Hospital, the future medical school and all public, private and volunteer healthcare facilities. Health City Novena will offer the full range of holistic care experiences for the residents in the central region of Singapore. It will also extend beyond healthcare to encompass a complete and holistic eco-system that includes health services, research and education, commercial, leisure and public spaces.

The triangle area formed by three MRT Stations, Singapore Expo, Simei and Tenah Merah has had a rapid development in recent years thanks to convenient access to major MRT line and expressways, and the success of Singapore Expo and Changi Business Park.  The Expo area can easily access to the CBD via Expo MRT Station, and by road via the Pan Island Expressway and the East Coast Parkway. 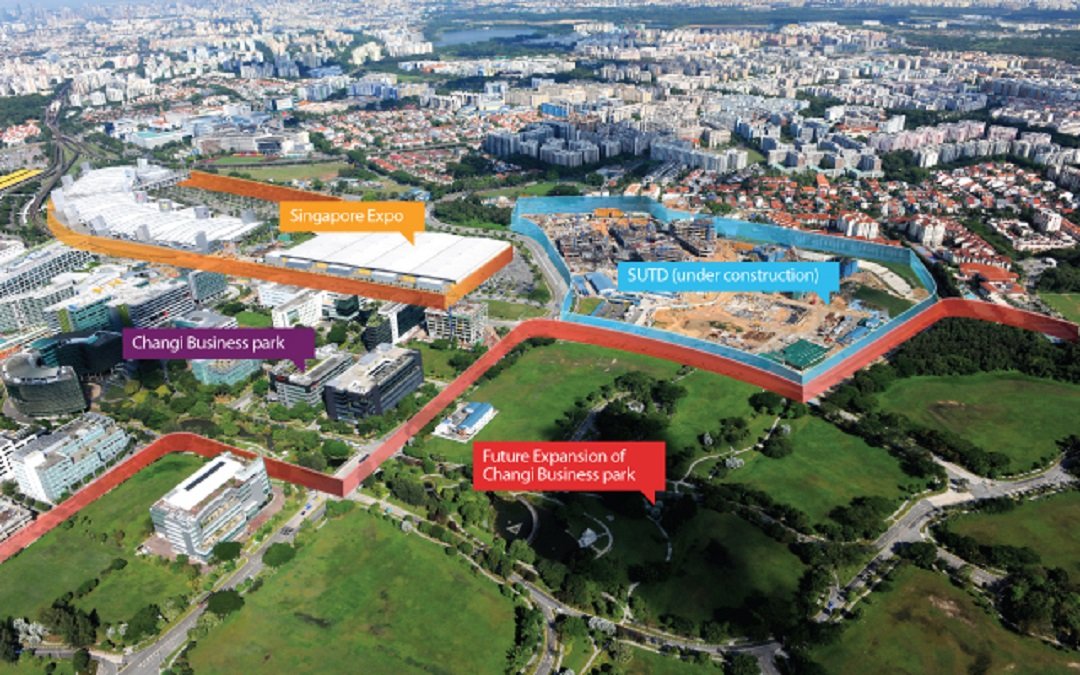 Just at the other side of Expo MRT Station, Changi Business Park (CBP) comprises a mix of high technology business, data and software enterprises, research and development divisions and knowledge intensive facilities, and also backend departments of banks. With the strategic planning, CBP has transformed into new business hub with mixed development of large retail shopping mall Changi City Point, office building, and hotel building. That is what we call Changi City project.  Next to Singapore Expo, a new interdisciplinary university Singapore University of Technology and Design ((SUTD) is also located to be completed by 2014.

Changi Airport’s extensive expansion plans will see new terminals being built, with Terminal 4 scheduled for completion by 2017 and the new Terminal 5 around 2025. People can also look forward to the development of Project Jewel by 2017, which will be seamlessly linked with the existing Terminal 1, and will feature a vast indoor garden and more shopping, dinning and leisure options. Together, the three new developments will anchor Changi Airport’s air hub status for years to come. They will also generate thousands of new jobs for Singapore residents. 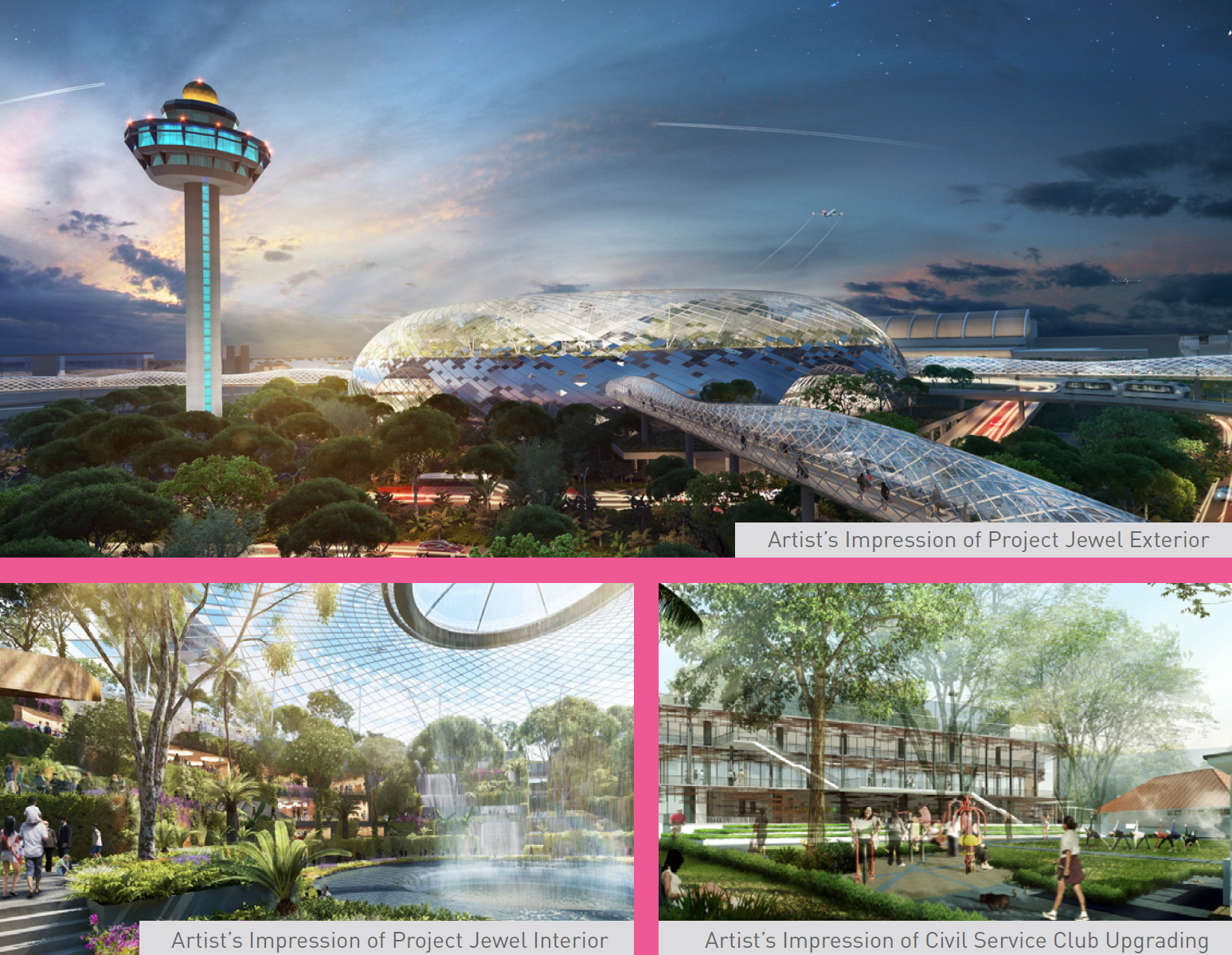 Jurong Lake District is Singapore’s second Regional Centre planned in Master Plan 2008 after the first and most established Tampines Regional Centre. The 360ha Jurong Lake District will feature two distinct precincts: a vibrant commercial area called Jurong Gateway and a waterfront leisure destination called Lakeside. It’s turning into the biggest lakeside destination for business and leisure outside the city centre.  In the middle of 2013, the giant mixed development JEM was opened to the public, and a 738-unit residential project J Gateway was sold out almost in one day. Many large-scale developments next to Jurong East MRT Station such as Jurong General Hospital, Shopping malls Westgate, Big Box are under construction. Jurong Lake District is getting ready for transformation. 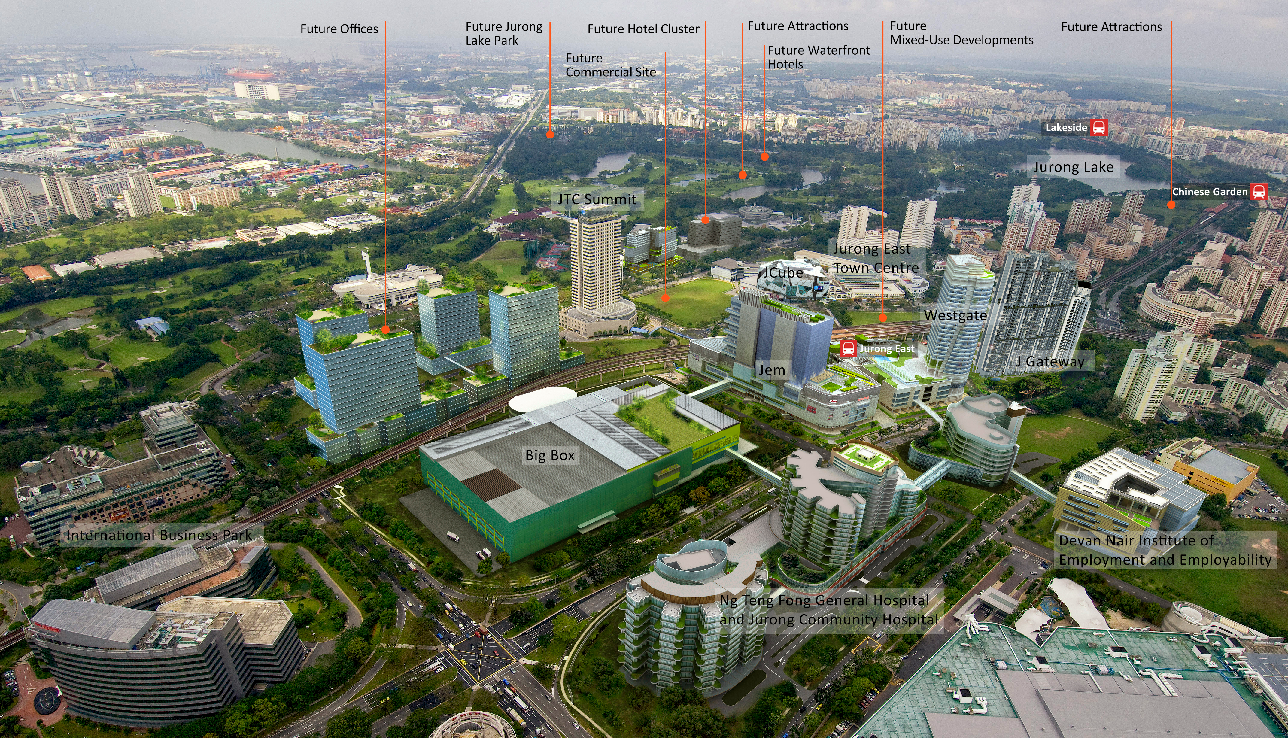 Jurong Innovation District (JID) is envisioned as the industrial park of the future, will be built as part of the Government’s push to encourage more innovation. Located in the area around the Nanyang Technological University, JID district will bring together researchers, students, innovators and businesses to develop products and services of the future.  It will also be the future of innovation for enterprise, learning and living while to house different activities within a single next-generation industrial district.

New commercial developments will be added to the Serangoon Sub-Regional Centre, providing businesses with alternative locations for office space outside the city. With this, residents in the North-East can expect better access to employment opportunities and more amenities.

Bidadari Estate – A Community in a Garden

Bidadari Estate is in the central location of city fringe in Singapore. To meet housing demands for a growing population, Bidadari Estate will be developed into a new public housing estate with a distinct character and sense of history. Envisioned as a tranquil urban oasis, the planning of Bidadari Estate will build on the area’s rich heritage, cherished existing green spaces and multiple public transport links to create a garden living environment.

The Government aims to utilize on its rolling greens, rich heritage, and convenient transport connections, and such new amenities in the vicinity are going to carry on. They include a commercial complex, health and medical centre as well as a new park with a pond and heritage walk.

Bidadari Estate will eventually house about 10,000 residential units, as well as community malls, a 10-hectare park and a lake. The estate will be conveniently served by two MRT stations – Woodleigh and Potong Pasir – on the North East Line. Those brand-new HDB dwellers are the potential buyers for the nearby private homes, especially The Andrew Residences.

Woodlands Regional Centre (WRC) is the third regional centre in Singapore as announced early in 2013 in Land Use Plan and draft Master Plan 2013. With two distinct precincts, Woodlands Central and Woodlands North Coast, Waterfront RC aims to be a key commercial cluster with vibrant live-work-play environment.

The upcoming Thomson MRT line will have three stations Woodlands North, Woodlands, and Woodlands South in the region. The confirmed South North Expressway is also in the vicinity of Woodlands RC.

With a waterfront lifestyle along Strait of Johor and as North Gateway to John Bahru, Woodlands is an important residential, industrial and recreational area with more 250,000 residents.  In Woodlands you can find large open spaces, grasslands, parks, recreational facilities and communal gardens nearly anywhere. This makes Woodlands a good destination of people who like nature, serenity and a countryside lifestyle. What’s more, it’s very convenient for residents here to go to Johor and Iskandar Malaysia. Great changes have taken place therein recent years.

The new town of Tengah will occupy about 700ha of land – about the size of Bishan town and is to be bounded by the Kranji Expressway (KJE), Pan-Island Expressway (PIE), Brickland Road and Bukit Batok Road. The area, which is currently used as a military training ground, will feature five new housing districts: Plantation District, Garden District, Park District, Brickland District and Forest Hill District. The first batch of flats will be launched in the Plantation District from 2018. When ready, the town bordering Choa Chu Kang, Bukit Batok and Jurong West towns is expected to have about 55,000 homes. 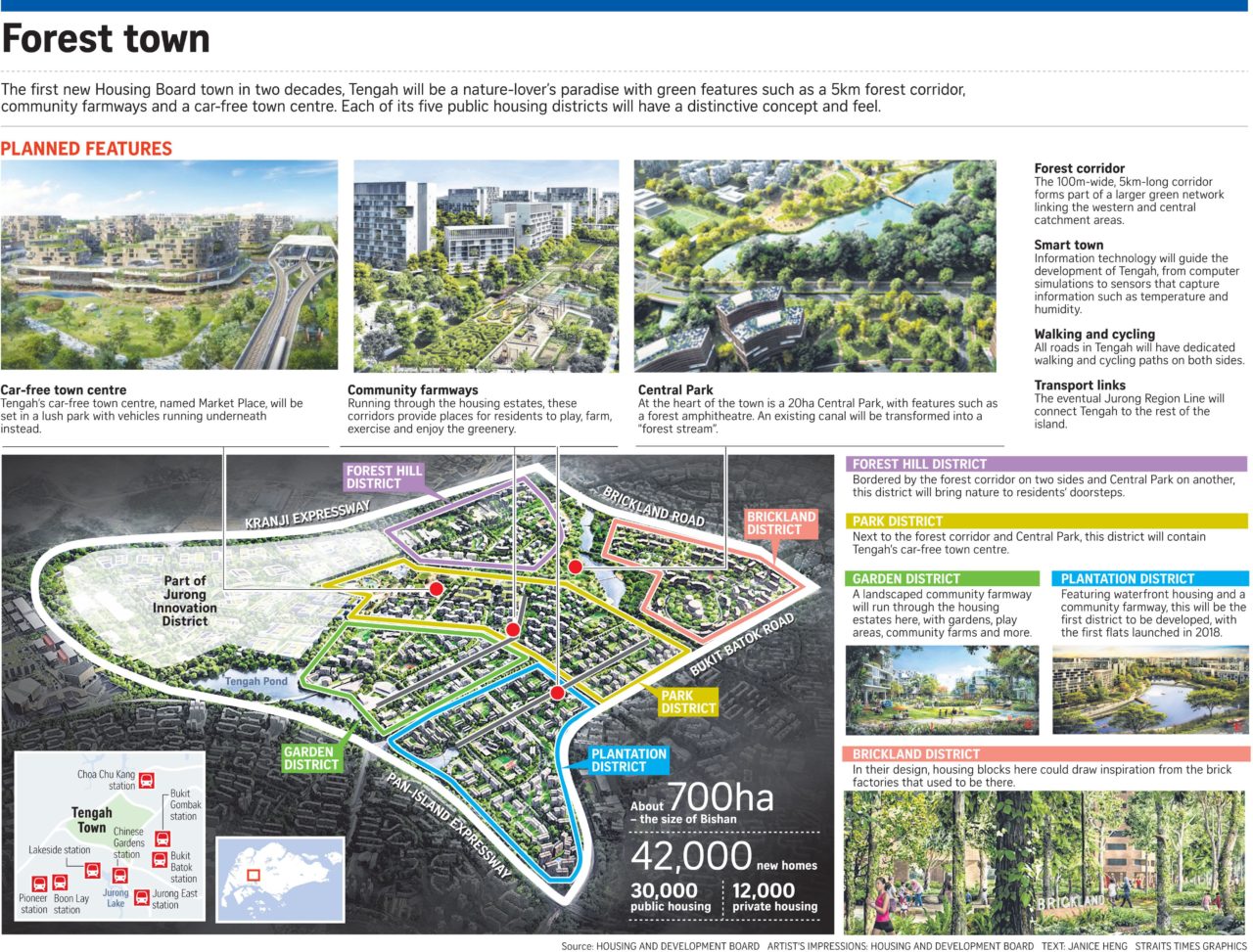