In January 2016, 322 private residential units were sold (excluding ECs) by developers, a 16 per cent decrease from the 384 units sold in December 2015. The subdued home-buying sentiment is largely seasonal – January is usually a slow month in terms of private property transactions due to developers timing their projects, preferring to wait after the Chinese New Year (CNY) celebrations before launching. Likewise, prospective buyers might have preferred to delay their property purchases until after CNY.

“January is traditionally a lull period for property sales due to the start of a new work year, as well as the upcoming festive season. One reason for the relatively poor sales stemmed from developers timing their launches – this translated to a lower transaction activity. The other reason, of course, was the weak market sentiment; buyers were waiting on the sidelines for better price offers from developers and more attractive project launches,” said PropNex CEO Mr Ismail Gafoor.

Properties in the Outside Central Region (OCR) was the most sought after in January, accounting for 67 per cent of new private home sales, while Rest of Central (RCR) and Core Central Region (CCR) accounted for 25 per cent and 8 per cent respectively. Given the challenging property market, coupled with the punitive 15% ABSD for foreigners (typical buyers for high-end properties), we think that the high-end segment will remain tepid in 2016. 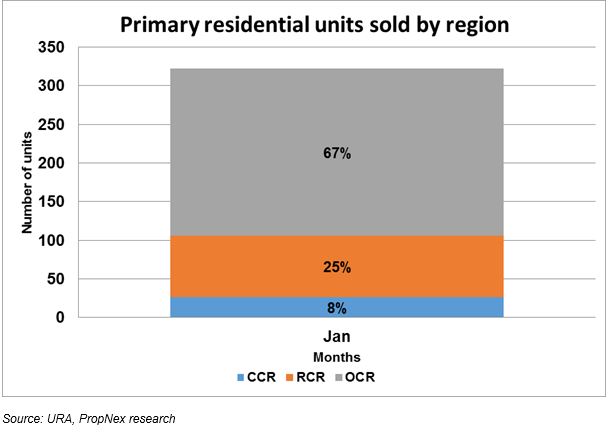 The Poiz Residences – the top performer in January

The 5 top-selling projects were – The Poiz Residences, The Amore and Brownstone ECs, Kingsford Hillview Peak and Sims Urban Oasis. 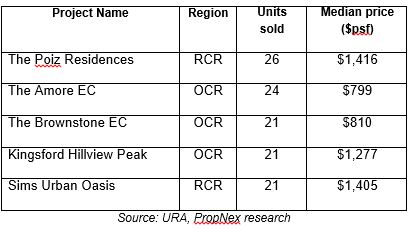 With no changes to the government curbs on the horizon in 2016, the private residential market is expected to remain soft – any sustained sales pickup would be reined in by rules on lending. New private home sales volume for 2016 is likely to about 8,000 units.

Mr Ismail expects the property market to remain relatively quiet at least in the first quarter of 2016, which could put pressure on developers to price units more competitively: “in the first quarter, we will likely see the launch of a Toa Payoh project; which may spur buying demand slightly. At the same time, developers will also be adjusting their pricing strategy to move units in their past launches – as evidenced in all of the 5 best-selling projects in January being from previously launched ones.”

Demand has been slowly building up and because of market anticipation of prices falling – many buyers have stayed on the sidelines waiting for the right time to buy. Mr Ismail recommends that homebuyers should buy now while interest rates are still low; we also foresee developers will continue to dangle incentives so as to move their unsold units.