Developer sales up 40% from May

In May, developers sold 1,065 private homes (excluding ECs), or about 40 per cent increase from the previous month. Also, 1,345 new private homes were launched for sale last month, an increase of almost 50 per cent from April. May’s sale volume indicates that the market is highly launch driven and underlying demand is present if prices are attractive.

“The 2 new projects; GEM Residences and Stars of Kovan helped to push numbers up. They contributed the lion’s share (or 36 per cent) of all new launches in the month and certainly helped to prop up the sales volume in May”, explained PropNex CEO Mr Ismail Gafoor. 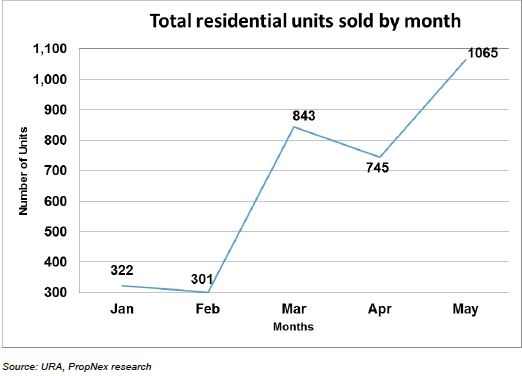 RCR most active due largely to GEM Residences GEM Residences – the top performer in May

The 5 top-selling projects were – GEM Residences, Stars of Kovan, The Poiz Residences, Bellewaters EC and The Vales EC.

Buyers to be ‘bargain hunting’

“Buying interest will remain selective. With two consecutive months of increased volume, there is a definite pick-up in momentum but whether it can be sustained largely depends on the project’s location and its pricing,” said Mr Ismail Gafoor.

With no changes to the government curbs on the horizon in 2015, transaction volume will continue to be launch-driven; largely dependent on the price and location of the project.

The luxury segment is also showing signs of a pickup due to strong performance of OUE Twinpeaks. Prices have reached a level whereby it is highly attractive to potential buyers.

“In Q3, the upcoming launches of Northwave and Treasure Crest ECs, and Lake Grande boost volume as developers look to step up their launch activities before the Hungry Ghost Festival hits in August”, commented Mr Ismail Gafoor.