Is the right time to enter Singapore’s luxury residential market?

Boulevard 88 |铂瑞雅居 | Market on the Move

Boulevard 88 is the ultra-luxury freehold condominium project building above the Edition Hotel and nestled in prime District 10 along Orchard Boulevard. It’s proudly developed by City Developments and designed by the world-renowned architects, Safdie Architects and DP Architect. Next to Four Seasons Hotel, Tanglin Shopping Centre and opposite Four Seasons Park condo, Boulevard 88 is just a stone away from the bustle Orchard Road shopping street and nicely in between Orchard and Orchard Boulevard MRT Stations.

Boulevard 88 will build more than one-to-one basement carpark, swimming pool and clubhouse on the sky Boulevard, providing 2 entrances via Orchard Boulevard and Cuscaden Road. Boulevard 88 will offer two 28-storey residential towers and 154 exclusive apartments along the prestigious non-landed residential address in Singapore. There will be 50 units of each 2-bedroom + study, 3-bedroom and 4-bedroom and exclusive 3-/4-5-bedroom penthouses. The dwelling areas vary from 1,313 to 2,799 sqft for the 1-4 bedroom apartment units, 5,673 to 6,049 sqft for the deluxe penthouse mansions.

Built by the Kajima Overseas Asia Pte Ltd, and landscaped by  Sitetectonix Pte Ltd, Boulevard 88 will be expected to receive its Temporary Occupation Permit by Jan 2022. As an iconic luxury condo above The Singapore EDITION Hotel, Boulevard 88 residents will enjoy the privilege Signature Residential Host Services. 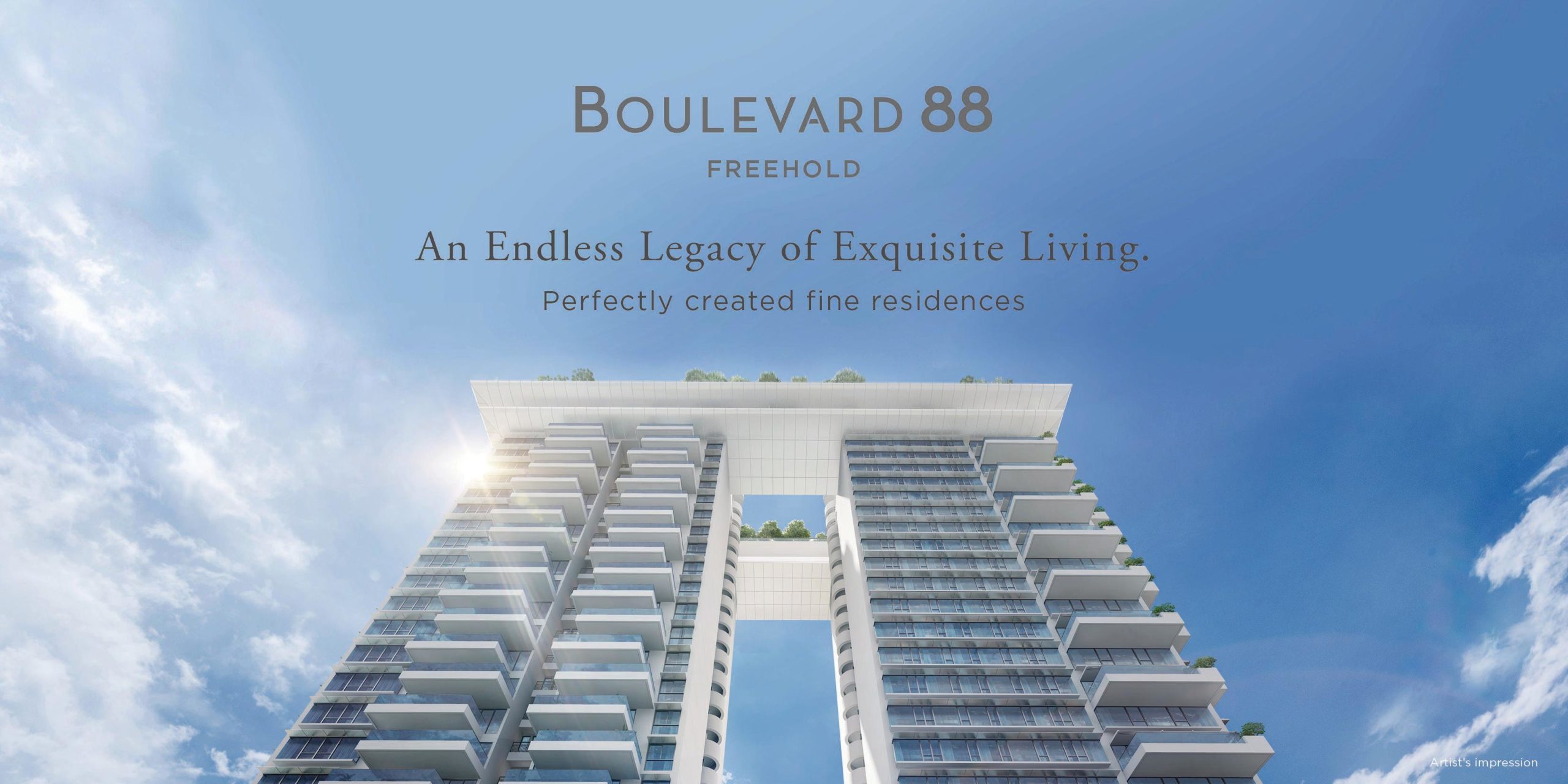 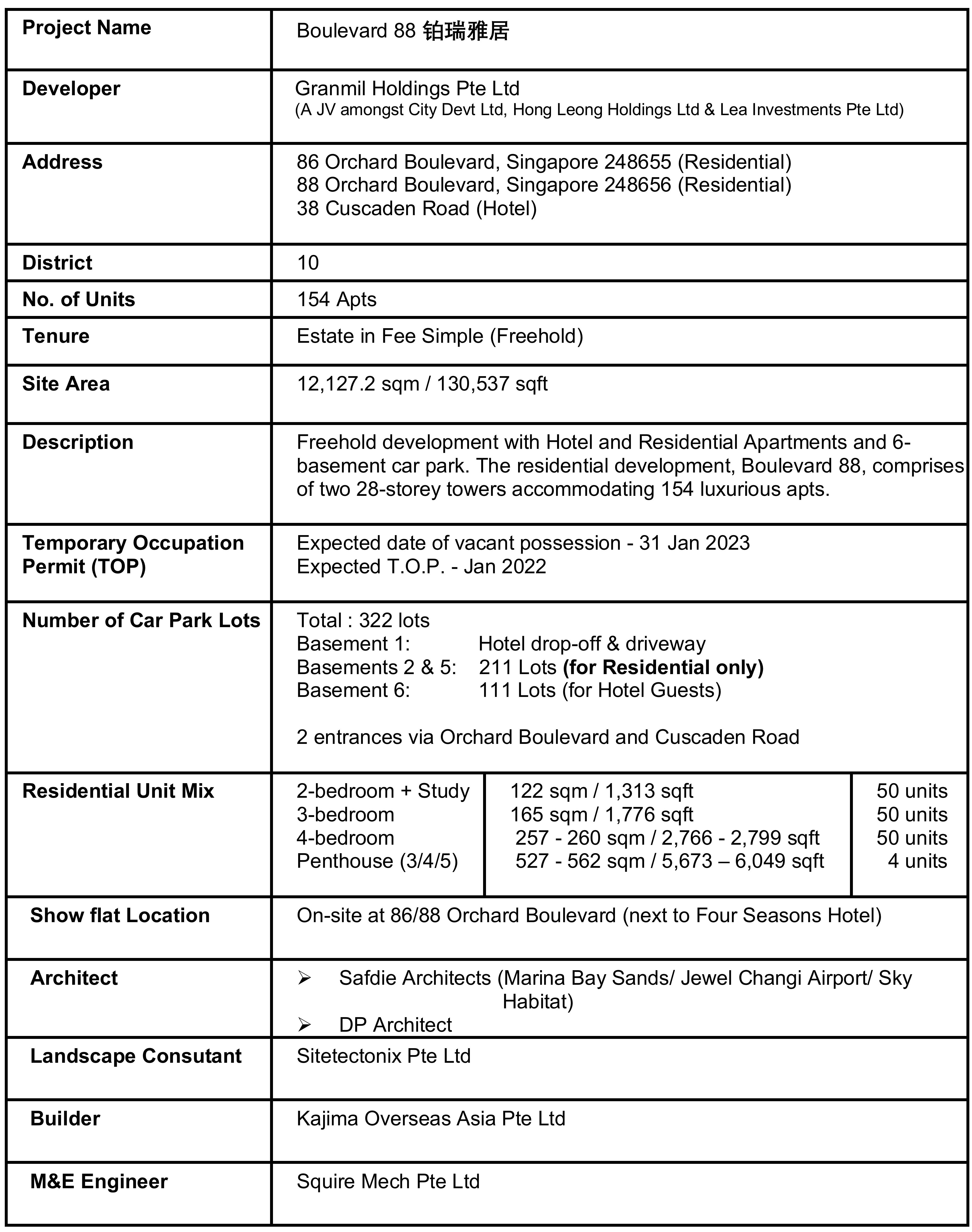 Boulevard 88 is an exclusive freehold address beyond compare, amidst the most prestigious residential address in Singapore. Located in an impeccable neighbourhood of distinction, Boulevard 88 puts you in the epicentre of cosmopolitan Singapore. With the city’s major shopping belt, international hotels, medical centres, cafes and restaurants, Boulevard 88 is a stone’s throw to all the sophistication and excitement of Orchard Road. Offering a lifestyle of ease that is mere minutes from the Orchard MRT and the upcoming Orchard Boulevard Station on Thomson-East Coast Line.

Already one of the world’s most famous shopping streets, there are major plans to make it even more desirable. Boulevard 88 is perfectly located to benefit from this transformation as Orchard Boulevard is at the nexus of the Tanglin and Orchard Road sub-precincts. With exciting plans to link and curate the arts, entertainment and shopping experiences like never before, Orchard Road will always be the lifestyle pulse of Singapore for years to come.

Orchard Road is the equivalent of Singapore, Champs Elysees in Paris, Fifth Avenue in New York, Ginza in Tokyo, Nanjing Road in Shanghai. This prestigious shopping street is less than a five-minute walk from Boulevard 88. The new condo are surrounded by international brands, high-end shopping malls and luxury hotels.

The famous Orchard Road shopping street in Singapore is set to be upgraded even further in the near future. When the street is fully implemented, Cuscaden Reserve residents will be able to enjoy a dignified and elegant lifestyle and be adjacent to the splendid Tanglin and Orchard Road bustling downtown. Once it blends art, entertainment and shopping, Orchard Road is bound to become the artery of life in this dazzling eastern metropolis.

There is some bus stop at the downstairs of Cuscaden Reserve, for easy access to the city and the entire island.  The condo residents will enjoy the romance and warmth of a tropical park and a natural oxygen bar from Singapore Botanical Gardens, a World Natural Heritage Site. It is just less than a 10-minute drive from Cuscaden Reserve.  The iconic Marina Bay Sands and the bustling financial district of Raffles are less than a 15-minute drive away.

Boulevard 88 is an exclusive freehold address beyond compare. Experience the privilege of open spaces that offer comfort and tranquillity in a stunningly crafted sanctuary. The iconic residential towers are elevated to provide unrivalled views, now yours to own. Spanning the two residential towers at the top is the Sky Boulevard, creating a dramatic tall ‘urban window’ and an outstanding skyline silhouette that is visible from the city’s surround.

Staying at a highly desirable address of the privileged few, life is certainly awe-inspiring at Boulevard 88. Designed by world-renowned architect, Moshe Safdie. Moshe Safdie is the famous name behind many regional and national landmarks, including Marina Bay Sands Integrated Resort and Jewel Changi Airport, Singapore. The two residential towers of Boulevard 88 is perched above The Singapore EDITION Hotel, which is an iconic eight-storey luxury hotel acclaimed for its artful aesthetic with 204 guest rooms. A unique concept in the lifestyle hotel space conceived by Ian Schrager and Marriott International, The Hotel’s design and services will offer a distinctive hospitality experience defined by Singapore’s embrace of the future, technology, arts and culture. It will be a place where travellers and locals alike will want to congregate, to celebrate and contemplate life.

Boulevard 88 will offer more than one to one basement carpark for the residents. With the city before you, the rarefied world above awaits with a plethora of indulgent spaces. From a generous Sky Club for private social functions; a gourmet Sky Kitchen for fine dining in-house; a Sky Lounge for drinks with a view; a Sky Lawn and Sky Cabana for leisure enjoyment, a Sky Gym and Sky Spa with state-of-the-art equipment to a spectacular 50 meter Infinity Sky Pool to immerse in luxury, every moment sets the standard for the finest experiences imaginable. 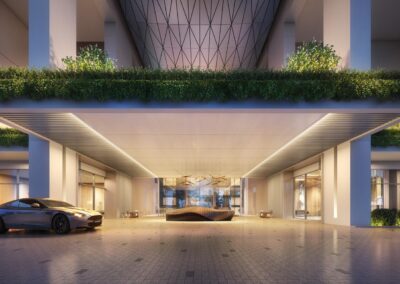 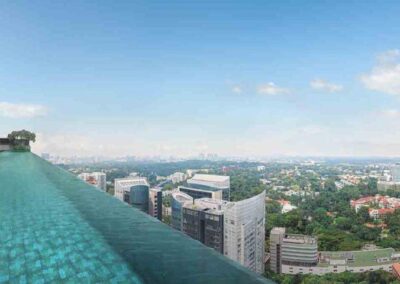 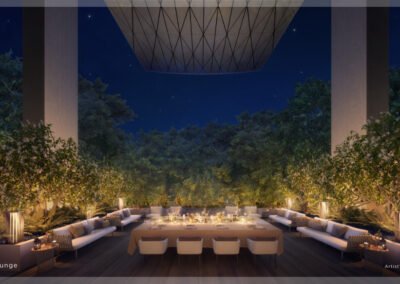 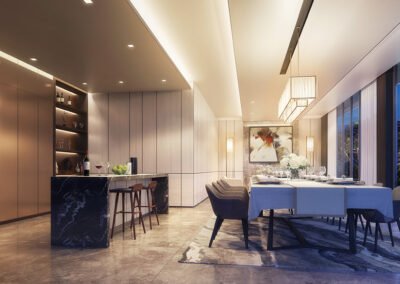 Designed to enhance the expanse of space, every conceivable detail in Boulevard 88 has been addressed to let life flow. Best of all, its freehold status is a vivid celebration of the finer things in life for generations to enjoy. With just 154 fine residences, whichever home you choose from two-bedroom + study, three-bedroom to four-bedroom units and penthouses, each and every one is positioned for supreme privacy. And the view,  Nothing less than magnificent with a layout that is created for the fullest appreciation of the panorama.

In the bedroom, a good night’s rest is assured with a spatial layout that allows more room for individuality. At Boulevard 88, only the finest quality materials and fittings are considered, such as the Italian Caccaro Wardrobe. This indulgence extends to the master bathroom, elegantly finished with Van Gogh accent marble and fitted with designer collections from Antonio Lupi and Hansgrohe AXOR Citterio E. Even for the kitchen area, only top-of-the-line kitchen cabinetry from the Ernestomeda Icon series is considered.

Boulevard 88 is in the Orchard Boulevard enclave in District 10 of Core Centre Region (CCR). CCR region is down the ages famous for its many clusters of upscale private condominiums and apartments. The CCR residential market is also the most luxurious house segment where many properties sell at the most premium prices, for example, easily across $3000psf.

Singapore private home market has entered the new uptrend cycle after the soar of land bid from both Collective Sales from developers and Government Land Sales (GLS) Programme during the period from 2016 to 2018. According to the URA reported in January 2020, Singapore private home prices rose 2.7% in 2019, as compared with the 7.9% increase in 2018. In 2019, new private residential property sales by developers increased 12.7 per cent to 9,912 units too.

There is a genuine, underlying demand for the private home. The increase in new sales transactions and growth in overall prices indicate the resilience of private residential property.  In 2020, Market watchers expect the market trends to be similar to 2019, given that market fundamentals remain unchanged: interest rates are expected to remain low, while the economy is expected to improve slightly in 2020.

For CCR housing market, the overall price index decrease 1.7%, as compared to the increase of 6.7% in 2018, while the prices in City Fringe and mass market increased by 2.8% and 4.2% respectively. According to the URA media release, the transaction volume and price index are still in line with the historical trend, which demonstrates the sustainability of high-end residential market. 2019 observed a series of new high prices in many hallmark areas, such as Holland Village, Newton Circus, River Valley, Outram Park, East Coast and so on. In 2020, it’s expected that around 4,000 new non-landed residential units 23 projects could be launched in 2020 in the CCR region, while 6,000 units across 22 projects are expected to be launched in city-fringe region.

The new cycle of En Bloc sales fever has taken place in the residential market since 2016, given that the numbers of unsold developer projects hit the historical low and increasingly fierce competition in Government Land Sales (GLS) Programme. The land costs for private condominium projects have island-wide increased varying from 15% to 20% in different regions in 2018, not mentioned the benchmark land cost in 2016. In CCR market, the average land cost was over $1800psf in 2018, which transferred the average new development launch price in 2019 to jump up to among $2800 to 3500psf.  During last year, it has been transacted over $4000psf in the most prestigious Nassim Road, Orchard Boulevard, Ardmore Park, and Marina Bay area.

The high-end residential market has turned up following the rise of higher land cost since 2017. New sales price tag replace the old one that more new condo projects in city area have been sold at higher prices. High-end housing market have running into a new uptrend cycle that sales price across $3000 psf is not a miracle any more.

2) In the East Coast area, prime District 15, freehold project in Amber Road – Coastline Residences sold some 2 bedroom unit at $3,010 psf, together with other 5 unit sold over $2,800 psf in 2019. Even in the mass market, the integrated residential development next to Bangkok MRT Station – Sengkang Grand Residences have sold over 45 unit at above $1800 psf, the highest transaction price was $1,898 psf. This is absolutely incredible.

6) In the charming Holland Village area, the blockbuster new launch – the mixed development – One Holland Village Residences set up the historical high transaction prices since Nov 2019. Over 120 units was sold at between $2600 to $3300psf since then. The highest price was transacted for some high-floor duplex 4 bedroom at eye-catching $3363psf.  Another bouquet freehold new launch -Van Holland which is opposite to Holland Village sold over 10 units in Jan 2020 with average prices at $2950psf. Following this trend, another mega freehold new condo-Leedon Green in Leedon Heights launched in Jan 2020 and sold over 30 units with average transaction prices at between $2600 to $2900psf.

By reviewing those recent record-breaking transactions done in the residential market, it’s quite new normal for the high-end luxury new condo to be transacted across $3000~$3500psf. What if it is a brand-new, luxury development with communal facilities in the coveted address like Cuscaden Road? There is more than a decade since the Government sell a residential site in the Orchard -Cascaden- Orchard Boulevard area.

In the above table, we just summarize the major new launches close to Orchard Shopping belt in recent years. You can justify how rationale are the latest launch prices for Boulevard 88. Here are the recent transactions for Boulevard 88. The average price are above $3500psf. Given its rare supply along Orchard Boulevard enclave for luxury freehold developments, Boulevard 88 is very popular among the high-net worth buyers not mention that the reputable developer City Developments and the renown Architect, Moshe Safdie.

By Booking Appointment by calling Sales Hotline 8869 9826 or online registration, you will not required to register at the reception counter when you visit the showflat. With the assistance of our professional sales representatives, you will be more assured ,well informed and prepared before commit to purchase new project home. Besides, you will also enjoy the best possible direct developer prices. What’s more, you are not required to pay commission to our sales professional.

Fill in the form to contact us to deliver first hand information at your fingertips today!