Public home prices largely flat in first half of 2016

HDB resale prices remained unchanged in Q2 2016 – the index has shown marginal price movements up and down in the past 3 quarters, therefore it is obvious that prices in a consolidation phase.

Mr Ismail Gafoor, PropNex Realty CEO said, “with prices consolidating, transactions will pick up. Buyers who have remained on the side-lines should have, by now, understood that prices will not fall very much more below this level. The prolonged price expectation mismatch between re-sellers and buyers has reached a stage whereby the stakeholders realised that this is the new ‘norm’. They have played a wait-and see strategy for some time now and will be making their moves soon.” 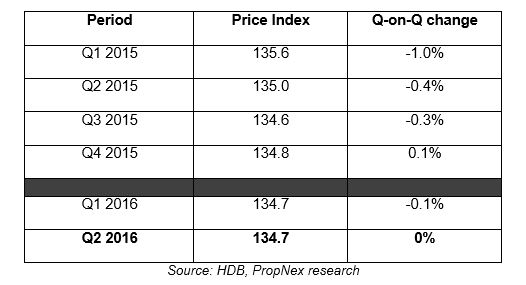 Resale transaction volume in Q2 2016 rose 10.4 per cent from the same time last year. This is the second consecutive year-on-year increase – which signals a return in confidence of the current resale market.

HDB Resale prices expected to be flat in 2016

In 2016, the government will maintain measures to stabilise the public housing market such as the Mortgage Servicing Ratio (MSR) cap of 30 per cent and the maximum loan term of 25 years for HDB mortgage loans, three-year wait for new PRs, and allowing singles to buy two-room BTO flats in non-mature estates.

In addition, the increase in BTO supply (HDB will launch 18,000 new BTO flats in 2016, more than the 15,000 which were launched last year) will continue to put pressure on prices.

Mr. Ismail predicts that 2016 may spring a surprise as the current price points will entice more buyers to enter the market as it is attractive enough for young couples and/or upgraders – we will probably see a price movement of up to 1 per cent, with volume exceeding 20,000 units due to the lower asking prices.

URA’s Q2 2016 data shows that prices of private homes in Singapore fell 0.4 per cent quarter-on-quarter, slightly lower than the 0.7 per cent decline in Q1 2016. With the property market continuing to operate in a tight financing and regulatory environment, Singapore’s property market remains within the down-cycle. This is the 11th consecutive quarter of decline which shows the sustained effectiveness of the numerous rounds of cooling measures.

“It is obvious that private residential prices is also in a consolidation phase with prices still under some pressure,” said Mr. Ismail, “prices will still continue to fall, but not in a big way. It will be a protracted and slow price correction for the next 2 quarters at least.” I expect private property prices to decrease by up to 2 per cent in 2016, led by OCR price decreases – this is the lowest in the last 3 years.” 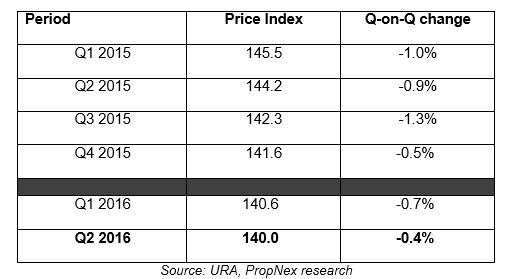 Luxury properties in the CCR rose 0.3 per cent as affluent Singaporean and/or foreign home buyers have greater holding power and are able to wait for a suitable offer before selling. Furthermore, CCR properties attract primarily high net worth buyers, who are less likely to be affected by existing measures. The current low interest rates may have also induced demand.

“CCR prices slid for the past 2 years and it has perhaps reached a level whereby consumers are somewhat comfortable with. Today’s CCR prices are much lower compared to 2 or 3 years ago; and with developers slashing prices and/or offering discounts, CCR prices have narrowed the price gap between RCR properties – which attracted buyers to pick up units there.”

In contrast, buyers of properties in the mass-market OCR and to a certain extent, the RCR, are generally more price sensitive, targeting properties with prices ranging from S$1,000-S$1,500psf in the mass market segment, and S$1,500-$2,000psf in the mid-tier segment.

Such buyers are usually bargain hunting, or looking for ‘value-buys’ – as such, the ability to take up loans is critical for their purchase decision – but many are hampered by the TDSR as Mr. Ismail believes that more potential buyers are finding greater difficulty to invest in a private home with a price quantum beyond $1.3 million given the lending curbs – and the situation is compounded by the ABSD.

Most purchasers are home-stayers and a significant group of them fall into the HDB-upgrader category. However, recent price indices from HDB and URA have fallen in the last couple of years, which again have impacted their upgrading ambitions.

“The non-increment in prices of HDB resale properties have led to a smaller gain achieved from the sale – which will in turn, limit the budget for their new private property and may cause some to put their plans on hold because the potential profit is insufficient to allow them to upgrade”.

OCR project prices have remained competitive as there is an added pressure for ‘reasonable’ pricings. This is in addition to the large oncoming supply in comparison to the other regions; and as such, OCR prices registered the biggest fall in Q2.

In addition, secondary market sellers also face stiff competition from developers who are continuing to launch projects at attractive prices and incentives. As a result, re-sellers may have to lower prices in order to make a sale. 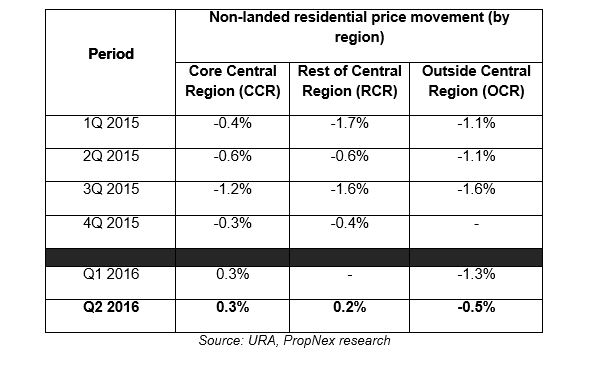 Notwithstanding the expected improvement in buying volume which is in line with more upcoming new launches in the pipeline, there seems to be little respite for the private residential property market at least in the short term. This is due to the continued enforcement of the property measures as well as interest rate increases and a large oncoming supply of homes. As such, Mr. Ismail predicts that a buyer’s market is expected to persist until the end of the year.

“We expect prices to remain relatively stable with a bit of downward pressure in 2016. Developers will continue to adjust launch prices to match the current inertia in the market, but will not drop prices too much due to the high price in which they have secured the land. Similarly, resale prices will take cue from the primary market in a bid to attract buyers”, said Mr. Ismail.